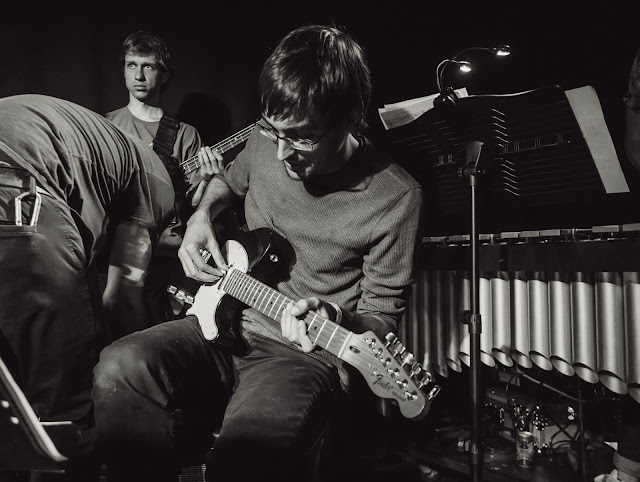 An interview with Joel Nelson about his debut album::::::

Sweet Wreath: You've made many collaborative recordings over the past few years with various musicians, but is this your first full album as a solo performer?
When and where did you record it?

Joel Nelson: Yeah. It's my first solo recording I have ever done.  It was recorded at Mills College in 2018 on a single night.

SW: You have a range of playing styles on the guitar, yet this album is quite focused on a particular un-guitar kind of sound.  It makes me think of the sounds of work.
The repetitive, rhythmic, percussive sounds evoke someone fixing something......there's also a mysterious feeling in the tone of the album overall.  Like you're tuning some esoteric machine.......Why do you feel that this approach was important for your debut album?

JN: I think it came from my interest in improvised music and avant-garde traditions. I was listening to different records that made use of extended techniques on the guitar.  It was very inspiring and felt like a way to continue to explore new musical ideas. So the un-guitar approach is partly of a tradition of trying to approach the instrument in new ways.  Maybe the sound of work and something being created from nothing is my attempts at trying to practice this musical tradition.  It’s also freeing to play in this way. I am not constrained by any traditional music standards of approach to sound. I get to take part in building a musical language for myself and I think it’s wonderful to have that as a debut album.

SW: Is this approach to the electric guitar about seeing the instrument for what it is materially?.....a piece of wood with metal strings and a magnetic pickup?
What we hear on these recordings are those materials.....it seems to be less about music than about the materials used in making music.

JN: I think it was about both. The materials of the guitar come together to make music. The materiality is drawn from my interest in microsound and texture based approaches.  I also follow my ears and try to get at sounds I want to hear or might like. It is very surprising sometimes when you find a sound that the instrument was probably never intended to make.  It’s maybe proof that all the elements of music remain no matter how much or little you go about deconstructing something. We always seem to find rhythm or melody no matter the extreme.

SW: I'm reminded of the piece "Dementia Setting In" you made for the compilation Mirror Water Mind.  You constructed an instrument for that piece right?  What relationship do you see between that and this album?

JN:  Yes! I grabbed a piece of wood, nailed some strings to it and then added a contact mic. I think we poured water on the instrument also. This album could be thought of as a continuation of that practice. I really like the idea of taking objects that might be thought of as garbage or useless and bringing out their musical qualities.

SW: You studied with Fred Frith, Daniel Schmidt and Roscoe Mitchell among others at Mills College. How did that experience influence the direction you took with this music?

JN:  I think it has and continues to influence me as I make music. Their music is very important to me and they were a huge part in helping me to think about what I am doing with music.  That’s true of all the teachers at Mills. It was never about trying to mimic the ideas or their music. It was a place that encouraged me to explore what I was interested in musically.

SW: You have a track dedicated to Davey Williams.  What has been his influence on your music?

JN:  Davey’s influence on me is his creative approach. He has a humor and love for music that is inspiring. He has a way of destroying the master narratives that surrounds music. This is very important to me because it creates a space for thinking about the endless possibilities of music.  I also just enjoy talking to him. Davey is an easy person to talk to and when we finally met in person it was like he was a close friend.

SW: There's not many albums these days that feature a solo instrument on one track of recording.  It's refreshing to hear something that features one kind of sound......it lends a meditative aspect to the act of listening.  It also seems that this is the kind of record you have to listen to with intention.  Is that how you approached this....as a cleansing, or meditative experience?

JN:  I don’t know if that was my intention or not. It kind of came out that way. The record happened in one sitting, that’s what kind of came out of it. I was working out a few ideas on how I wanted to approach the guitar and then I just improvised. I always want all my friends and family to be happy or at peace with themselves but that is an idealization that will never get realized.  I feel like those emotions get caught up a lot of the time in my music.  Maybe that’s the cleansing or meditative experience that is being played out on the record.

SW: Final question....what have you been listening to and reading lately?